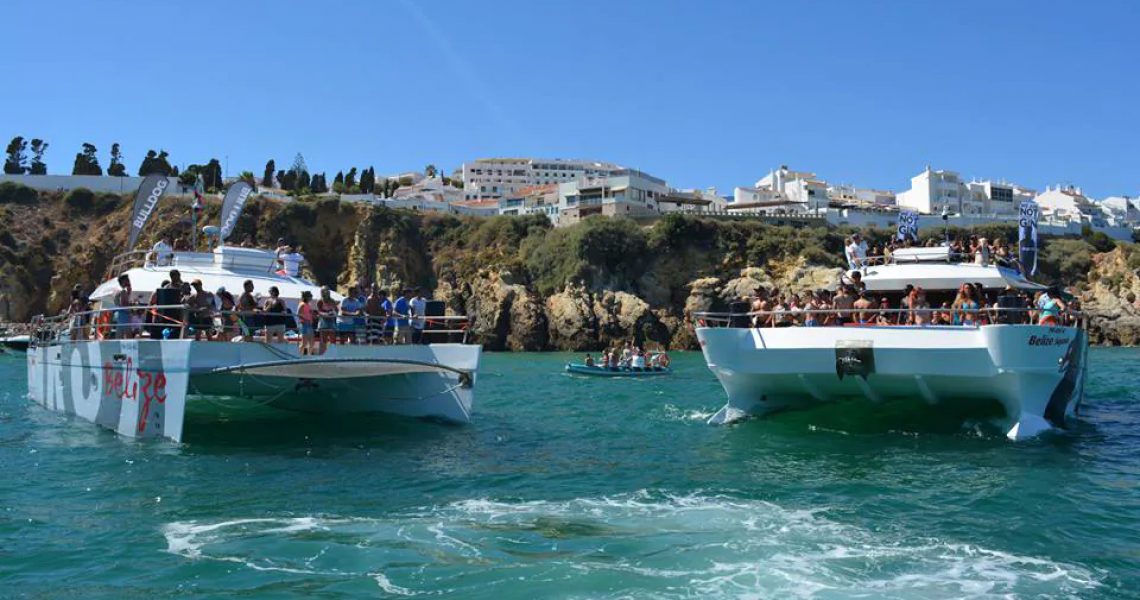 On July 1st, AlgarExperience held the Albufeira Water Fest & Yacht Day event for another one more year, bringing together several boats on a tour throughout the coast to the sound of renowned DJ's and in an unforgettable party atmosphere.

The event began with a pre-party at 2:00 pm on Belize Café Deck with DJ Bruno Zarra who has always had a passion for electronic music and has bet in this branch to evolve personally and professionally, managing to become versatile in sound art and surprise in the deep house and tech house.

While people were arriving to board on the best boat party of all times, the Deck was becoming more and more crowded, and the support bar relied on the experience and dedication of two bartenders who demonstrated the refinement of the Gin Bulldog, justifying the choice as the official drink of the event.

Approaching 4:00pm, people were still coming and eager to board on our catamarans Belize and Belize Second. Passing through Gate 5, people were quick to pick up the best seats on the boat to enter on the mode “Party On”. Already with the complete boats and the masters in charge, the boats began to leave the Marina of Albufeira and some others were already waiting for us in front of Pescadores beach, tuning in the frequency 100.1 FM to obtain, at the same time, the sound of the DJ that was in Belize Second.

For the opening of the musical repertoire, we counted with the presence of DJ Mónica Avillez who amazed by betting on house and techno and did not let anyone sit down.

A magnificent sunny day that motivated some people to go to the bath and others to simply enjoy the moment and dance incessantly. After the performance of Mónica Avillez, DJ Carlos Manaça came into action. With a career in the area over thirty years, he did not give time for people to rest and maddened them with his characteristic sound that defines the reason why he is so renown not just as national level as well as internationally.

In the meantime there was a Flyboard show that was performed by an expert of this water sport who demonstrated the elegance and technique of some movements that can be made with this equipment. It consists of a plank connected to a hose that is attached to the water spit and with trhough the pressure in the water, can reach up to 15 meters in height.

Accompanied by a panoramic landscape of the city of Albufeira and already with a fast heart beating, the people didn't want the party to finish. The sunset begins slowly accompanied by the sound of DJ China who has a strong and long-standing connection with AlgarExperience. His main objective is to exceed the expectations of his audience and for them to keep that in memory.

Undoubtedly, AlgarExperience's promise was fulfilled when it was recognized the dedication of the organization of the event that seeks above all the satisfaction of all the surrounding and valued the performance of the different DJ's that demonstrated their passion for what they do.

To all the presents a huge thank you for the words, moments and smiles spread among all. This website uses cookies to improve your experience while you navigate through the website. Out of these, the cookies that are categorized as necessary are stored on your browser as they are essential for the working of basic functionalities of the website. We also use third-party cookies that help us analyze and understand how you use this website. These cookies will be stored in your browser only with your consent. You also have the option to opt-out of these cookies. But opting out of some of these cookies may affect your browsing experience.
Necessary Siempre activado
Necessary cookies are absolutely essential for the website to function properly. These cookies ensure basic functionalities and security features of the website, anonymously.
Functional
Functional cookies help to perform certain functionalities like sharing the content of the website on social media platforms, collect feedbacks, and other third-party features.
Performance
Performance cookies are used to understand and analyze the key performance indexes of the website which helps in delivering a better user experience for the visitors.
Analytics
Analytical cookies are used to understand how visitors interact with the website. These cookies help provide information on metrics the number of visitors, bounce rate, traffic source, etc.
Advertisement
Advertisement cookies are used to provide visitors with relevant ads and marketing campaigns. These cookies track visitors across websites and collect information to provide customized ads.
Others
Other uncategorized cookies are those that are being analyzed and have not been classified into a category as yet.
GUARDAR Y ACEPTAR
Scroll Up
Si necesita más información, contacto con nosotros.
Menú
Reserva Ahora
Si necesita más información, contacto con nosotros.