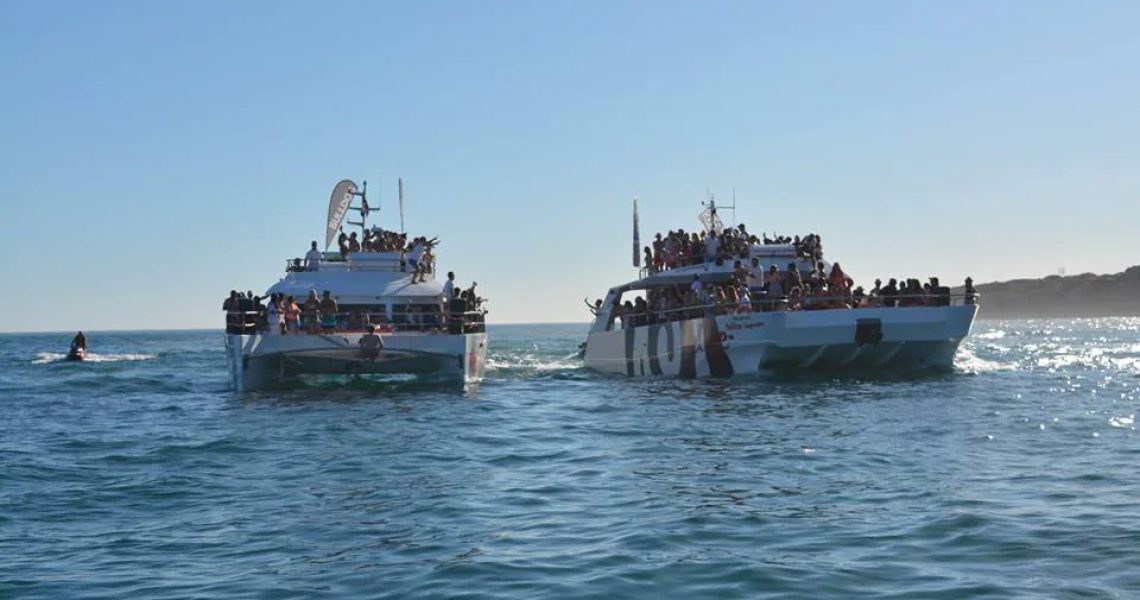 On the 10th of August of 2017, AlgarExperience and Stereo Productions organized another great event called Stereo Boat & Beach Party that has been repeating over the years and fulfilling the promise of being the best boat and beach party of the year in Portugal.

With the presence of several DJ's known nationally and internationally, the party started at 11am on the Deck of Belize Café with DJ Hugo Villanova.

The guests began to arrive and join those who were already in a festive mood, looking forward to embarking on the catamarans Belize and Belize Second for a memorable day with the support of Stereo Productions.

After embarking everyone, the vessels left Albufeira Marina to the sound of the assiduous algarvian DJ China who since 1988 has been known for sharing quality and good music of different styles such as house, electro and techno. Then began DJ Oscar L who is characterized as one of the best spanish artists in the world of techno and house, creating unique connections with his audience due to his contagious energy. After thit, the dance floor was in charge of the best pair of professional spanish DJ's and producers, DJ Chus & Ceballos, recognized by the fusion of house and techno and pioneers of “Iberican Sound” that took them to the best clubs in the world and led them to success worldwide.

In addition to the quality of the music present at the event, before and during the stay at the beach for the barbecue lunch was held a flyboard show where the expert of this sport demonstrated some techniques that could be done with a simple pipe interconnected to a water jetski.

Around 4:00 pm, the funny and attentive staff began serving the guests with the barbecue menu which included grilled shrimp, grilled fish and meat, algarvian salad, crisps and a slice of watermelon.

To enrich the environment, there were three different bar sections available. One would be the prepayment area where guests bought tockets to switch for drinks. Another area was the bar of the current drinks, such as beers, soft drinks, waters, sangria, white/red wine and some spirituals. The other section was the premium area where there were served different gins such as Gin Bulldog and the finest cocktails. In this last area, were at disposal three barman's representatives of the Bulldog who didn't rest for a second, because the wish for a fresh drink was incessant.

In a frenetic and memorable environment, the hours went by and the excitement and satisfaction of all the guests was evident.

At nightfall, the vessels returned to their starting point and many still enjoyed dinner at Albufeira Marina.

It was an unforgetable day that we'll be back on 2018! This website uses cookies to improve your experience while you navigate through the website. Out of these, the cookies that are categorized as necessary are stored on your browser as they are essential for the working of basic functionalities of the website. We also use third-party cookies that help us analyze and understand how you use this website. These cookies will be stored in your browser only with your consent. You also have the option to opt-out of these cookies. But opting out of some of these cookies may affect your browsing experience.
Necessary immer aktiv
Necessary cookies are absolutely essential for the website to function properly. These cookies ensure basic functionalities and security features of the website, anonymously.
Functional
Functional cookies help to perform certain functionalities like sharing the content of the website on social media platforms, collect feedbacks, and other third-party features.
Performance
Performance cookies are used to understand and analyze the key performance indexes of the website which helps in delivering a better user experience for the visitors.
Analytics
Analytical cookies are used to understand how visitors interact with the website. These cookies help provide information on metrics the number of visitors, bounce rate, traffic source, etc.
Advertisement
Advertisement cookies are used to provide visitors with relevant ads and marketing campaigns. These cookies track visitors across websites and collect information to provide customized ads.
Others
Other uncategorized cookies are those that are being analyzed and have not been classified into a category as yet.
SPEICHERN & AKZEPTIEREN
Scroll Up
Für weitere Auskünfte stehen wir Ihnen gerne zur Verfügung.
Menü
Jetzt buchen!
Für weitere Auskünfte stehen wir Ihnen gerne zur Verfügung.